Archbishop Ghunkianos Ashtaraketsi, a cenobite of St. Etchmiadzin, a prominent clerk of the second half of the 18th century, the notary, encyclicalist of the catholicoses of Simeon I Yerevantsi (1763-1780) and his successor Ghukas I Karnetsi (1780-1799), the “det” of the city of Yerevan (controller, overseer), is one of the most proficient spiritual figures of the Armenian church. The literary merit of clerk Ghukianos is presented by around ten cursive manuscript writings (N 2, 1880, 2289, 2499, 2646, 2652, 3281, 7424, 10853) generally preserved at Mashtots Institute of Manuscripts. 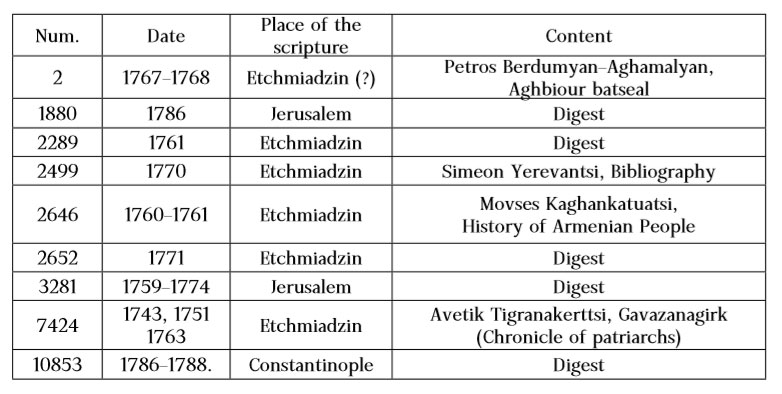 The names of some of the initiators of the above-mentioned manuscripts prompt that Ghukianos used to be one of the most prominent and talented scribes of his time to whom the responsible work of writing the manuscripts was entrusted by the respective persons. For example, by the order and under the Catholicos Hakob V Shamakhetsi (1759-1763) Ghunkianos wrote the manuscript N 2646 in 1761 which the record of the manuscript testifies about.

The annals on ordaining Ghunkianos Ashtaraketsi spiritual degrees is best manifested in the ordination lists of the catholicoses Simeon and Ghukas of N 2882 manuscript of “Chronicle of ordinations” (N 2882) preserved in Matenadaran after Mashtots. Among them the register compiled by Catholicos Simeon is an important and trustworthy document in regard with the biographies of St. Etchmiadzin friary of the second half of the 18th century. According to the register Ghunkianos Ashtaraketsi was ordained a deacon under the Catholicos of Simeon Yerevantsi in 1763, a monk in 1771, a preceptor (abuna, vardapet) in 1772 and under Ghukas Karnetsi Ghunkianos he was granted a degree of an bishop in 1781. After three years in 1784, Ghunkianos, usually mentioned as a “clerk”, was granted an “ultimate wand” which is, perhaps, dignifying with a title of archbishop.

“Gavazanagirk” (chronicle of kings and patriarchs) is an inseparable part of a literary merit of Ghunkianos Ashtaraketsi continued by the latter on the order of Catholicos Simeon, a work commenced by Avetik Tigranakertsi still in the beginning of the 18th century and later replenished by Hakob Shamakhetsi (1743). Gyut Aghanyants took the ordination list of Catholicos Simeon from the mentioned work. N 1492 manuscript “Digest” of Matenadaran after Mashtots contains the very work of author-writers Avetik Tigranakertsi, Hakob Shamakhetsi, and then Ghunkianos: N 7424 manuscript of Matenadaran (written in 1743, 1751, 1763 in Etchmiadzin), as well as N 6243 manuscript later copied by the clerk of mahdesi (pilgrim of Jerusalem) Hambardzum Harutyunyan in Alexandropol in 1847 also have the same context.

The circular or octagon seal bearing the name of Ghukianos Ashtaraketsi has preserved in a series of manuscripts of Matenadaran mainly written in Etchmiadzin (N 704, 710, 874, 1100, 1546, 1576, 2182, 2289, 2340, 8763, 9563 etc.) on which it was usually mentioned: “SERVANT OF CHRIST, PRECEPTOR GHUNKIANOS” (ՔՐԻՍՏՈՍԻ ԾԱՌԱՅ ՂՈԻՆԿԻԱՆՈՍ ՎԱՐԴԱՊԵՏ); they are mainly dated by the years of 1760-1780. This fact also testifies about the high position and status of a leading notary in the face of Ghunkianos in the Holy See of St. Echmiadzin.

It is noteworthy that Ghukianos died at the end of the 18th century from the plague epidemic. According to the inscription of his recently found cradleform gravestone in the monastic cemetery of St. Etchmiadzin it took place on February 6 of 1798. His mother rests in the same cemetery and where, according to her gravestone epitaph, she is the mother of; “…the lord Ghunkianos, the clerk of the God-descended throne” «…պետին Ղունկիանոսի, Աս տուածաէջ գահիս գըրչի…».